State of Delaware, Department of Finance 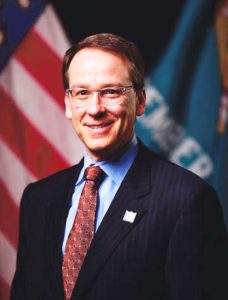 Richard J. “Rick” Geisenberger was sworn in as Delaware’s 18th Secretary of Finance on January 18, 2017.  He was nominated by Governor John C. Carney and confirmed by the Delaware Senate. The Secretary of Finance is the state’s chief financial officer, and is responsible for promoting Delaware’s fiscal health through fair and efficient forecasting, generation, collection and accounting of state funds. He oversees the State’s Division of Revenue, Division of Accounting, Office of Unclaimed Property, and the State Lottery Office. Together these agencies collected a record $3 billion for the state’s General Fund in Fiscal Year 2019.  The Office of the Secretary is also responsible for statewide revenue forecasting, tax policy analysis, and bond finance.

Geisenberger serves on several financial oversight bodies, including the Delaware Economic and Financial Advisory Council, the Delaware Public Employees Retirement System Board of Trustees, the Delaware Health Care Commission, and the Cash Management Policy Board to name a few.  He also serves as the Vice Chair of the Diamond State Port Corporation that owns the Port of Wilmington.

Secretary Geisenberger is also an Executive Sponsor of the Government Efficiency and Accountability Review (GEAR), created by Governor Carney to make annual recommendations on ways to increase the efficiency and effectiveness of State spending. GEAR works to support, recommend and implement cost savings ideas for shared services across State government and public education while driving the implementation and recognition of best practices in continuous improvement among state employees.

He previously served as Delaware’s Chief Deputy Secretary of State, and the Director of the Division of Corporations. Delaware is known internationally as the corporate home to more than two-thirds of Fortune 500 companies. During 16 years of service in those roles , the number of Delaware legal entities increased 140%; the State’s incorporation revenues doubled to more than $1.1 billion; and the Division earned ISO 9001 certification and won the Delaware Quality Award’s prestigious W.L. Gore Award of Excellence in recognition of its world-class quality management system.

Secretary Geisenberger earned his M.G.A. degree from the University of Pennsylvania, his B.A. from Franklin & Marshall College, and he has completed the Wharton Executive Program in Mergers and Acquisitions.